The question is being asked? What will bring Mary Bond’s end to stealing, obstruction and most of all a crime wave by a public person that simply cannot be stopped by the legal authorities – until now.

On June 7, 2022, Mary will face two felony accounts. And if found guilty, courthouse talk is that she will be taken into custody. The question (s) of the violation of her Orange County conviction and probation and the Jefferson County charges she was arrested for this last week are still in “flux” according to probation office rumors. They too have had enough. So the wisdom in the offices of Jefferson County is that Mary will have her day in court, but again, if found guilty, she is gone to jail until sentencing – or Judge Stevens might just put her into jail right then and there. And it could be for a very long time.

The question on everyone’s mind is how she got to this point. How did she get so far into the system and why are the public officials turning their heads.

Now first, let’s start with the Jefferson County District Attorney’s office where rumors run wild that she has had interactions with some of the higher-ups. This is far from the truth. Orange County tells us that she had no karma whatsoever and they got her a good deal. But in the back of their heads – they knew she was out of control. She just acts bipolar and strange.

On to Jefferson County – where she has the most problems. It seems that during her out of control experience – she went from one crime to another, used big names in the county to try and scare people after they discovered she was a criminal that loves to steal, and used her parent’s names as big-time West Enders to shut down anyone that might come after her.

As well, Bond uses the internet in another fashion using a VPN false Google phone number to send texts to anyone that may be of threat to her such as this one received by employees at the Review: 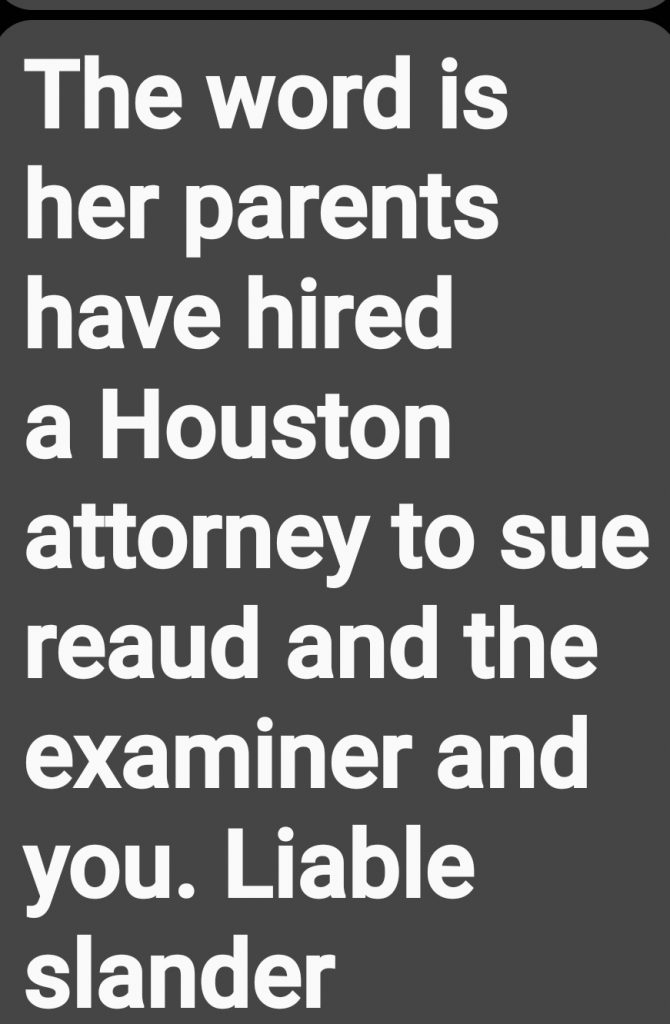 As we insinuated back to Bond, nobody can be that stupid as we the “defendants” would have full access to anything Mary. But this is what thugs do, they intimidate people that they know they cannot intimidate as they know they are caught and do not know what to do – whatsoever. So they lie again.

And now to Mary’s future – we have been advised that her former employer at the apartments she worked at (Treadway) has six more at the least and five more (being 11 more charges) that will put her in jail if convicted – for maybe 20 years – and again – get the children to the loving grandparents that can raise them properly and get them away from her.

There are so many people that she has hurt in the name of democratic politics, and frankly in the GOP. She used her girl parts to get what she wanted, she used lies, and she used anything she could to get money. She has ruined lives, and the system just pats her hand and says do not do that again or else. And there is no or little or else. She is what is wrong with the justice system. One time, yes, pat on the hand and pay some money. But now, if what we are told is true, she will get another pat on the hand, until she comes face to face with judge Stevens – who by the look of his video the other day has had just about enough.

Who is at fault? Again – the justice system. Her lawyer, superlawyer Gertz (being serious), has done all he can. She wants to go to trial on June 7. Maybe Gertz can pull a rabbit out of his hat? Who knows – but we all care. If there was anyone that deserves to pay time in jail, is the former democratic vice-chair (as she says she was) Mary G. Bond?

What can be done for the future? Stop the crap at the courthouse. Treat everyone the same – as if anyone other in this county can walk so many times for theft by a girl that has screwed herself to the inner circles. And we are not talking just about sex. We are talking about a horrid person that took advantage of those that have tried to give her a leg up. Not even Burger King would hire her now.

And last, to CPS, end the misery of her children. Don’t point the finger here. It is a matter of time before folks like KFDM and Angel San Juan get this story – and her name will become MORE of a household name. She has already teamed up to try and screw Councilmember Mike Getz by putting up illegal signs – she got caught and the candidate that she was helping had no idea what she was doing. It was found that she and one other were guilty of crimes during that race. That was a shame – and it continues to be a shame. It puts a worse face on politics. As we say in the business “No Quarter.”

We will watch, and we hope that you watch, the fight that is breaking out at the courthouse by those that Mary has something on – and the truth. In the end – the system has created a monster named “Mary Bond.”

Well, one thing is for certain we have learned over the weekend – it is time for the government to step into a horrible situation we have learned from Paramedics, Police, Fire Fighters, Flight Nurses and Doctors, and any other person that is involved in public safety.

What do you ask? The event is called the “Go Topless” jeep event. This year, it brought over 100,000 people to the small island which caused over 200 arrests over a three day period, one police officer who was life-flighted in critical condition at the time, and over 200 calls for service for EMS/FIRE which ranged from auto peds to overdoses, to injured persons who were beaten up on the beach, to stabbings and other trauma-related offenses. 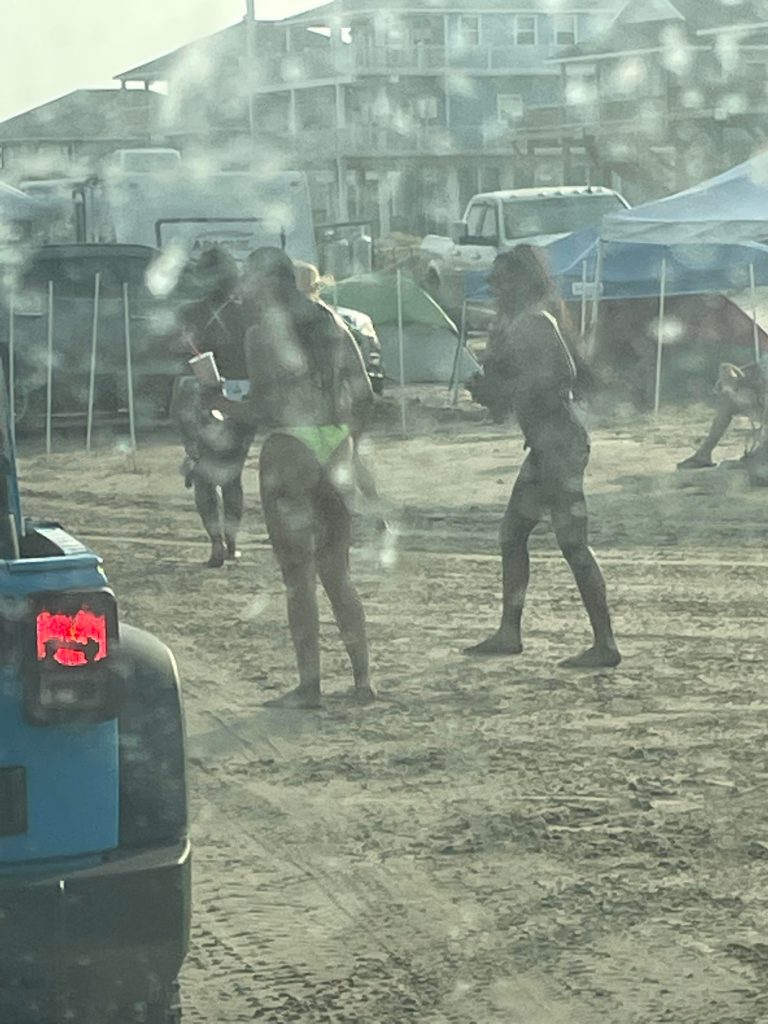 Another paramedic told us: “We ran so many calls we were just trying to keep up with paperwork at one point. I thank God so far nobody died. There certainly were chances for Mr. Death to arrive – but I have to hand it to Doug Saunders our chief – he preplanned with helos and buses which we could use as mobile emergency rooms. It worked and we survived and those we served did as well.”

So we did what most should do, we made contact with some government officials in both Galveston and Chambers County.

“We are looking at the numbers then options. It is not a private beach, it is a public beach. The officers were overwhelmed, the paramedics and firemen did their jobs and nobody died. We just have to figure it out. They can do what they want I guess – but understand that some will die. It will take an act from our legislature. They have not given us the power.”

This used to be a fun event that was uneventful other than the closet alcoholics that like to talk about how good they are and you should not drink and drive – yet pull out the stops and bring those shakers and vodka to the beach and forget what they are doing and almost kill people. Or for that matter, their bratty kids that slug down the stuff and end up in an EMS unit not breathing as paramedics do their thing and bring them back.

It sounds like it is time for the legislature to step in. This is sad – but…

For a while around this joint – we have had a stand-down policy. We are very limited to who we will do interviews with all the way to NO MAS. Meaning, no more. Until about six months ago when we kind of opened up on this website – and we started making some comments.

Super Dave of the PA Political group has a Podcast that we simply enjoy. We will listen to it every single time it comes on. And so about two weeks ago – SUPER (as our leader calls him) got a note of request to come on his show. So we shot a note out to SUPER and sure enough, he was being serious. After all, everyone listens to Klein because they never can predict what he knows or what he will say.

So, this afternoon the two men, who pretty much are on the other side of most political issues, sat down and did a one-hour podcast. That turned into a 1.5-hour podcast that reached deep down into the politics of Jefferson County.

We want you all to listen to this – as here are two men that are unelected on the front lines and in tune with the voters. Super David predicted 3/4 and Klein hovers at a 9/10 prediction rate. Meaning each is 1 point from being perfect,

So on this Sunday, as you lay your heads on the beads, you might just want to listen and enjoy. And here they are Super Dave and our editor, Philip R. Klein.

Enjoy! And welcome to the Bee Hive!

The Southeast Texas Political Review is a production of Klein and Associates Political Relations. © 1995 – 2022 PRK Enterprises, Inc.  Any rebroadcast or reproduction of this site is forbidden without the permission of this Company. Such permission must be in writing and consist of the person’s name – address – and the reason for the reproduction. Under Title 17 of the US Code – Subjects that reproduce or reprint any portion of this site without permission of PRK Enterprises, Inc. may be liable under the statute. For comments – questions – or requests for the reproduction of quotes or stories as written on this site, please E-Mail us at setreview@gt.twcbc.com.

You are visitor number :